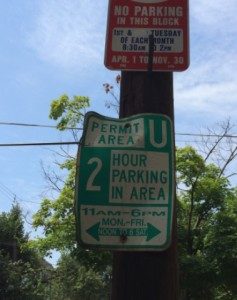 Have you ever found a parking ticket on your windshield, or worse gotten towed, after parking on a street with murky parking regulations? Have you ever tried to decipher convoluted signs only to give up and drive away to look for a space somewhere else? Brooklyn designer Nikki Sylianteng may have developed the solution to all our parking woes.

Instead of a text-based sign that can cause confusion when there are different regulations depending on time of day and day of week, Sylianteng took a different approach – a graphical sign. Her design very clearly shows when it’s okay to park and when it isn’t, as well as time limit restrictions such as two-hour parking.  This new approach conveys all the restrictions on just one sign and can easily replace two or more text-based signs displaying the same information. Sylianteng even accounts for color blindness – the “No Parking” periods are accented with diagonal lines to distinguish from the solid green areas when parking is permitted.

A graphical sign shows the same information in a much clearer way as multiple text signs.

This clearer design would seem to be most effective in areas where there are multiple parking restrictions, such as a dense residential neighborhood where most residents park on the street. For example, if the only restriction on a street is a two-hour street sweeping period every two weeks, the graphical sign may not be required. But once designated visitor parking times are introduced, or if time restrictions change from day to day or even hour to hour, Sylianteng’s graphical sign makes it very clear who is allowed to park on a street, as well as when, and how long they can stay without being subject to ticketing or worse.

Nikki Sylianteng’s graphical parking signs, as designed today, do have one drawback. They lack clarity as to when parking is completely prohibited for all versus just visitors without a permit. For example, if visitor parking is generally permitted from 10:00 a.m. to 4:00 p.m. on weekdays, but is prohibited for all vehicles from 10:00 a.m. to 12:00 p.m. on Wednesdays for street sweeping, some distinction must be made for these exceptions. This can get still more complicated if street sweeping happens only once or twice per month.

A solution to this issue could be to introduce more colors, e.g. blue shading meaning “No Parking Street Sweeping” on the 1st and 3rd Wednesdays of the month. Graphical signs do have their limitations, but it is difficult to imagine a situation where they would be more difficult to comprehend than a text-based sign. 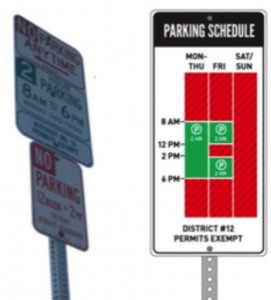 This is not the first example of graphical signs being used to replace text-based ones. Graphical lane-use signs have been used to replace text signs, such as “Left Lane MUST Turn Left,” particularly on roadways with complicated lane use, such as those with multiple turning lanes. Graphical guide signage can be very effective in locations such as rotaries and roundabouts, since there is often too much information to be displayed to drivers via text while traveling at significant speeds.

Do you think graphical parking signs are a good idea? What communities or specific areas do you think could use them?