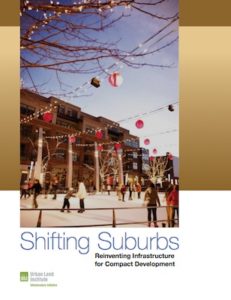 Jane Howard is a founding principal at HSH, a transportation planner with over 35 years of experience in urban planning for both public and private clients. She advises her clients on transportation demand management techniques and smart growth, which encourage compact development. She recently attended an Urban Land Institute breakfast on the topic of “Smart Growth and Infrastructure.”

Howard/Stein-Hudson’s work on Melnea Cass Boulevard in Boston, Adams Green in Quincy, and the Merrick Neighborhood in West Springfield, is right in line with current trends highlighted by the Urban Land Institute (ULI) in its recently issued study, Shifting Suburbs: Reinventing Infrastructure for Compact Development.

The study highlights eight cases from around the country, illustrating how local governments are rethinking their infrastructure to encourage more compact, pedestrian- and bicycle-friendly development and streetscapes. In particular, ULI emphasizes:

Shifting Suburbs notes that these projects are taking advantage of a “demographic wave” of Gen Y-ers, young people who are increasingly demanding compact, walkable places in which to live, work, and play.

Some of the arterial work, like HSH’s Melnea Cass Boulevard project in Boston, is being undertaken in conjunction with Bus Rapid Transit (BRT) projects.  The thrust of the planning and design is to add or widen sidewalks, improve streetscape, narrow vehicle travel lanes, and create bus and bicycle travel lanes under a “complete streets” philosophy.

The end goal is to use the infrastructure improvements to create value and encourage reuse of large, underused parcels of land, such as Parcels 9 and 10 along Melnea Cass Boulevard, that are now in the midst of mixed-use redevelopment planning.

While many suburban transformation projects have focused on reuse of defunct strip malls and shopping centers, the Adams Green project in Quincy is focused on the city center itself.  HSH is assisting the City with implementing major circulation changes in the downtown that improve the pedestrian environment and enhance a green space near historic Quincy center.

In West Springfield, HSH’s work in revitalizing the Merrick Neighborhood directly addresses the themes of the ULI study regarding the need for local government to revise zoning and infrastructure regulations.  HSH is preparing a form-based code to reinforce the traditional, compact, walkable, and mixed use development patterns in this historic neighborhood, using a coordinated series of context-based zoning, complete street design standards, and open space requirements geared to civic gathering.