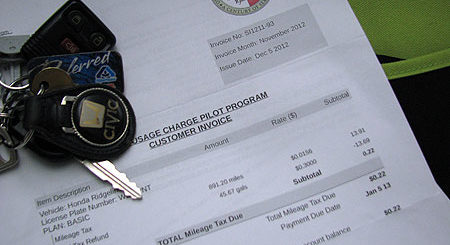 Guest blogger Hannah Giovannucci provided this piece about creative financing planning for transportation infrastructure in Oregon.  Hannah is a staff transportation engineer at HSH, specializing in traffic analysis and simulation.  She is interested in using new technology to improve our transportation system.

The newest method for generating transportation revenues is currently a pilot program in Oregon.  The technology, a mileage tracking device, was the subject of a recent Intelligent Transportation Society of Massachusetts (ITS Mass) meeting in Boston.

Fifty participants, some of whom are legislators and transportation officials, are testing a mileage-based tax system in Oregon through use of the tracking device.  The legislation is expected to pass by the end of 2013 requiring high-efficiency vehicles in the state to pay the tax beginning in 2015.

This concept was developed as a method of replacing lost gas tax revenues, which are used to maintain and modernize the nation’s highway system.  Currently, more than half of the revenues required to operate, maintain, and modernize roadways are supported by the gas tax.

However, over the past several years, fuel tax revenues have declined despite the increase in population.  The dip in tax revenues is a result of increasing fuel-efficiency in vehicles.  The nation’s recessed economy plus higher gas prices have further eroded gas tax revenue.

Four different mileage tracking options are available: (1) standard GPS, (2) full-featured GPS, (3) non-GPS, and (4) smart phones.  The mileage-tracking equipment developer says the GPS options do not grant the government location-tracking power, which should eliminate most privacy concerns.  Since some Oregon citizens may still be suspicious, the non-GPS option quells those concerns as well.

Unfortunately, non-GPS users will be taxed for every mile they drive, despite state boundaries.  A smart phone option with GPS technology provides yet another alternative that can still function while the phone is off.

Practical issues and public concerns are continually being addressed about the tax-collecting devices and overall concept with responsible parties working to provide solutions. Concerns voiced at the meeting among the Yankee spirits in Boston were numerous:

The developers of the pilot program believe that this technology is the inevitable way of the future. Do you foresee Massachusetts or other states adopting a similar mileage-based tax system to generate revenues to operate and maintain our transportation network? Although there are concerns such as those voiced by the ITS Mass meeting attendees, only time will tell. In the meantime, it is fascinating technology and an interesting concept.  For more information, check out Oregon DOT’s project web site: http://www.oregon.gov/ODOT/HWY/RUFPP/Pages/rucpp.aspx