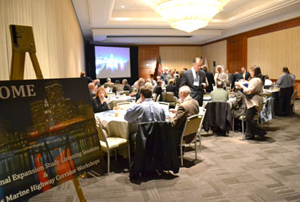 2014 is poised to be a milestone year for international shipping. The Panama Canal will double its capacity, triggering an unprecedented transformation of freight operations worldwide. At doubled capacity, the Canal will accommodate significantly larger container vessels, serve a higher volume of freight traffic, create thousands of jobs, and generate positive economic impacts. Expansion plans are already impacting U.S. ports along the Atlantic, Pacific, and Gulf coasts, as well as the various intermodal connections that feed those ports. Recognizing the profound impacts that the expansion will bring to the industry, the U.S. Maritime Administration (MARAD) launched a Panama Canal Expansion Study earlier this year to provide the U.S. government with a comprehensive assessment of the anticipated impacts of the expanded canal on U.S. ports and infrastructure.

The study is being led by the Economic Development Research Group (EDRG), and HSH is assisting with a series of “Listening Sessions” around the country to obtain feedback from port operators, freight carriers, businesses, and many others regarding their concerns about potential changes in international shipping patterns. Two listening sessions have been conducted to date: one in San Francisco, and the other in New York City where HSH staff led hundreds of participants through in-depth discussions of topics including likely changes to post-expansion U.S. trade patterns, impacts on ports, infrastructure, and the cost of doing business.