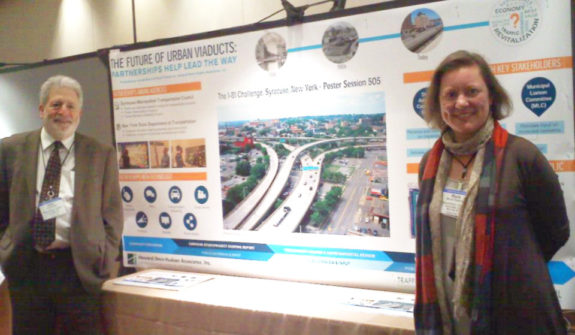 HSH presented two posters at the TRB Session “Innovations in Public Involvement,” namely “The Future of Urban Viaducts: Partnerships Help Lead the Way” and “Mapping Consensus: Casey Arborway Project.” The former dealt with the firm’s ongoing work on the I-81 viaduct in Syracuse, focusing on the varied methods of engaging stakeholders and the general public in the discussion on whether to rebuild or fundamentally change the role and structure of this major highway that both bisects and serves the heart of Syracuse. Maura Fitzpatrick presented the poster. The Casey Overpass poster dealt with HSH’s innovative use of mapping public comments to better identify where supporters of an at-grade vs. replacement viaduct alternative live in relation to the structure, located in Jamaica Plains, Boston. The results helped support MassDOT’s recommendation for an at-grade solution, particularly in discussion with nearby elected officials concerning their constituents’ preferences. Arnie Bloch presented this poster, filling in for Nate Cabral-Curtis, who led the public involvement effort on this project. Many people who passed by our posters stopped to talk about the content; these included people from all over the country who are facing similar choices in their communities. A surprising number of people who used to live in Boston or Syracuse stopped by to talk about their old home towns. Many people praised the look of both posters – including members of TRB’s Public Involvement Committee. We would like to acknowledge the work of Mary Miltimore, Colette Molleur, Ray Hebert, and Nate in producing these wonderful posters.