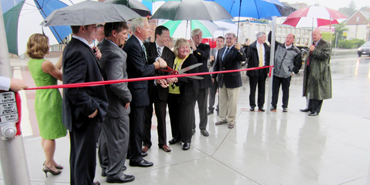 On August 28, 2012, Mayor Joseph Sullivan of Braintree, Mayor Susan Kay of Weymouth, and Richard Davey, Secretary and CEO of the Massachusetts Department of Transportation (MassDOT) cut the ribbon signifying the successful completion of the Braintree/Weymouth Landing Revitalization Project.

The infrastructure improvement project highlighted the area’s focus on economic development. Since 2010, Howard/Stein-Hudson Associates has been working with the towns to plan, design, and construct streetscape and infrastructure improvements to restore the Weymouth Landing area as a business-rich village center. The towns were awarded a $2.4M Public Works Economic Development (PWED) grant (now known as MassWorks) from MassDOT to refresh the village center to stimulate economic development, enhance current businesses, and provide enhanced pedestrian amenities.

Acting as the towns’ representative during construction, HSH was on site throughout construction to ensure the project was delivered according to the design plans. HSH’s Robbie Burgess, P.E., served as the Resident Engineer for the project. Robbie supervised the Contractor’s work, coordinated the project with the towns and managed the budget and schedule.

Robbie, along with HSH’s CEO Thomas Stokes, P.E. and Rebecca Heavey were in attendance at the ribbon cutting ceremony, celebrating the towns’ collaborative efforts to restore Weymouth Landing to its prominence as a business district.