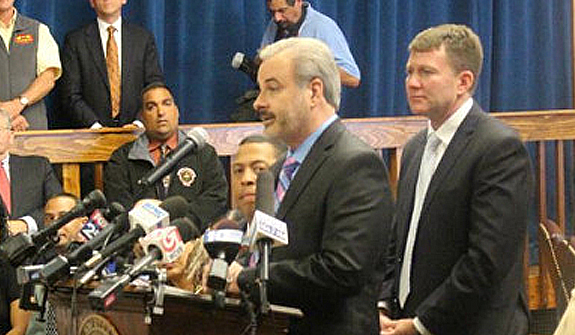 Howard Stein Hudson has been working for the Mashpee Wampanoag Tribe since 2010 in obtaining approvals from MEPA and NEPA and securing permitting for all off-site traffic mitigation for a proposed destination resort and casino to be located in Taunton, Massachusetts. An even more important aspect of this project was realized when, just recently, the Bureau of Indian Affairs notified theTribe that land in Taunton and Mashpee will be taken into trust on the Tribe’s behalf and that gaming will be allowed on the Taunton site.

Dave Matton, HSH’s Principal of Public Infrastructure, explained at a press conference in Taunton the status of the mitigation and the plans for construction. David has been working on a strategy for traffic circulation for both on-site and off-site for several years. As the project evolves from the current technical design work to construction oversight, HSH will continue its role in advising the Tribe and ensuring the traffic operations are in line with a world class destination resort and casino.

The staff at HSH couldn’t be more proud to have played a small part in helping write American history, as we now will see the Mashpee Wampanoag people reclaim a small piece of their historic territory,while at the same time, Project First Light will assist the Tribe in securing its financial future.

Read more about this exciting development project in the news:
Taunton Gazette