One of the best things about the NACTO conference is its “walkshops,” or walking workshops, where employees of the host city give tours of new or in progress infrastructure projects, planning studies, iconic neighborhoods, etc. to conference attendees. The first walkshop I went on at NACTO in Toronto was a tour of the PATH system, a network of underground pedestrian walkways that connect subway stations, office buildings, commercial and residential developments, and hotels underneath the streets of Downtown Toronto. The PATH isn’t merely a convenient connection for its more than 200,000 weekday commuters and tourists; it is a destination unto itself with a wide variety of shopping and services dotted along its more than 18 miles of walkway. It’s basically an underground version of a modern mall with bright, artful, and welcoming architecture and lighting, wayfinding signage, and local businesses.

The PATH came into being organically starting with a handful of stores, Union Station, and a hotel connecting to each other in the early 1900s. Soon, interest grew in joining and expanding the network, and the City ended up starting a program for wayfinding signage and maps. The system has gone through a number of renovations over the years, one of them fairly recently, ensuring that the walking experience feels safe and inviting. And the PATH continues to expand and gain new connections as nearby developments occur. Some of these connections are in the form of enclosed overhead pedestrian bridges, connecting two buildings across the street from one another. Now there are so many residences and employment centers connected to the PATH that apparently one can spot commuters going to work without a coat on in the middle of winter because they never have to walk outside the climate-controlled PATH system! Another fun fact of the PATH is that there is a piece of artwork from renowned street artist Banksy that was saved from a razed building nearby and put on display along the PATH. Features like this make what sounds like a dark and unpleasant experience – walking underground – enjoyable and comfortable, important factors to the traveling public when they decide to walk or not to walk. 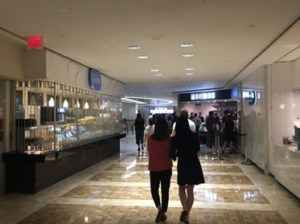 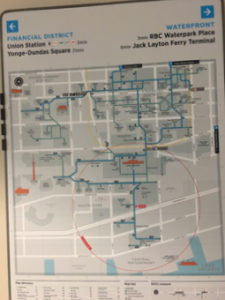 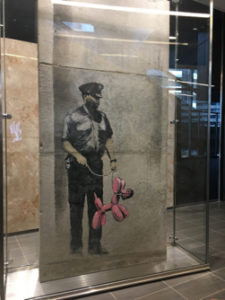 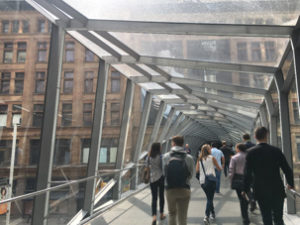