We know that providing bicyclists with a separated facility, protected from moving traffic by a physical barrier such as planters, bollards, or parked cars, is safer than a normal bicycle lane or riding in general traffic.  But how much?

Until somewhat recently, many in the bicycling world, including transportation engineers and bicyclists themselves, considered riding in the roadway at similar speeds as vehicle traffic (or “vehicular cycling”) to be safer than riding in a separated facility, such as a shoulder or bicycle lane (protected bicycle lanes, or cycle tracks, are a relatively recent development in the US).  However, vehicular cyclists must ride at faster speeds than most feel comfortable or able to ride, and, while squarely in the view of motorists, are still very vulnerable; crashes involving cyclists are much more likely to result in injury or death than crashes involving only vehicles.  Even crashes that are typically relatively benign, such as rear-end crashes and sideswipe crashes, can be deadly for cyclists. Today, most cyclists and transportation engineers embrace separate accommodations for cyclists due to their safety benefits and attractiveness to intermediate and novice cyclists.

How much do separated accommodations improve safety?  A study of Toronto and Vancouver hospitals found that a street with a bicycle lane and no parked cars was 50% safer than a similar street with no bicycle lane.  Similarly, cycle tracks were found to increase safety by 90% over similar roadways with no bicycle accommodations.  The team developed a safety spectrum, which illustrates which bicycle facilities are safest, depending on cyclist preference and route safety; cycle tracks, while not as preferred as off-road paths, were considered the safest facility.  On the contrary, major streets, even with shared lane markings, were considered to be relatively unsafe. 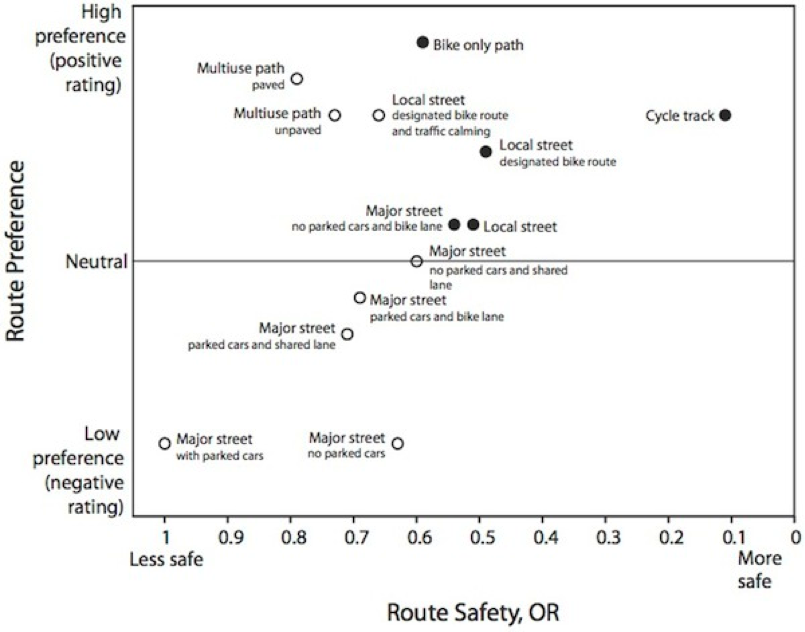 In addition to being up to 40% safer than painted bicycle lanes, protected bicycle lanes have been shown to increase bicycle ridership at rates that exceed citywide bicycling growth.  A new study out of Portland State University, which conducted comparison studies in five US cities, seeks to determine how much cycle tracks can encourage cycling on a roadway.  On roadways where a protected bicycle lane was installed, either replacing a painted bicycle lane or as a brand new facility, bicycling increased by at least 21%, and as high as 171%, on those roadways.  At least 10% of the increases were found to have been new cyclists who shifted to bicycling from another mode – walking, taking transit, or even driving. The largest increase occurred on Dearborn Street in Chicago, where there was previously no bicycle lane, and a two-way cycle track was installed.  Bicycling increased by 171% on Dearborn Street, a north-south roadway located about ¼ mile west of Michigan Avenue (or the Miracle Mile), Chicago’s premiere downtown shopping district.

Two-way cycle tracks did particularly well at attracting cyclists to the new facility.  In addition to Dearborn Street, Bluebonnet Lane and Rio Grande Street in Texas also received two-way cycle tracks, and experienced increases in bicycling of 46% and 126%, respectively.  In each case, bicycle lanes had been provided.

Boston is embracing the benefits of protected bicycle accommodations.  Construction is ongoing on River Street and Western Avenue, which will provide the first cycle tracks in the City and provide a safe, comfortable link between Boston, Cambridge, and their Charles River Paths.  Similarly, the design process is ongoing for the Connect Historic Boston cycle track, which will run between Cambridge Street and the Rose Fitzgerald Kennedy Greenway along Causeway Street and Commercial Street, which will connect countless commuters and recreational riders to Downtown Boston, the North End, and the West End along the beautiful Boston waterfront.

Would access to a protected bicycle facility entice you to abandon your car or public transportation in favor of bicycling?  What is the biggest barrier to your ability to bicycle for a greater percentage of your trips?