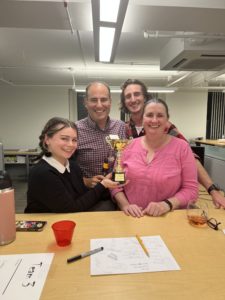 rsday, October 26 was a busy day for HSH staff! This celebratory day featured the first in-person coffee hour, a costume contest, and a spirited night of trivia. Festivities took place at our Boston office, but celebrations were extended to our Worcester and Chelmsford offices as well as virtually.

To celebrate two years of coffee hours, the E&I Committee hosted our first in-person AND virtual option for those working outside of Boston. Staff had the opportunity to learn more about their peers playing ‘Coworker Bingo,’ which featured finding someone who has worked at HSH for more than 10 years, has a birthday in October, has NEVER seen Game of Thrones, and much more. Coffee and breakfast snacks were also provided across all three offices to celebrate the two-year milestone.

After working hours, staff enjoyed the return of Trivia Night, hosted by Sporcle! Before the showdown, staff enjoyed drinks and a taco bar catered by Anna’s Taqueria. 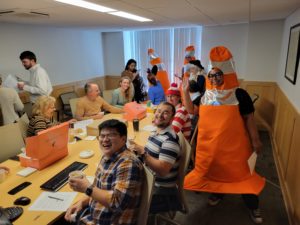 To round out the day, staff voted for best costume which featured entries from Bob Ross, Waldo of Where’s Waldo?, George Washington, Traffic Cones, and others. The creativity and effort of all entrants was greatly admired, but it was the Traffic Cones that came out victorious. For their winning efforts, the Greasy Mega Killer Cookie Monsters and the Traffic Cones earned gift cards to High Street Place and bragging rights for the next year.